Spain is the healthiest country in the world, at least that is what Bloomberg, the famous news agency for financial institutions, has announced.  Bloomberg Healthiest Country Index

Bloomberg gives Spain a score of 92.7 out of 100 after moving up five positions since the last analysis in 2017, and highlights the quality of the public health system. They have to see the tomato and ham, olive oil and other lunches, but also the primary health care system.

The Bloomberg index assigns points to each country according to variables such as life expectancy, medical care or the availability of drinking water. It subtracts the incidence of risk factors for public health, such as obesity or smoking. Countries with sufficient data and more than 300,000 inhabitants were taken into account, 169 nations in total.

People living in Spain have the second longest life expectancy in the world, just after Japan. 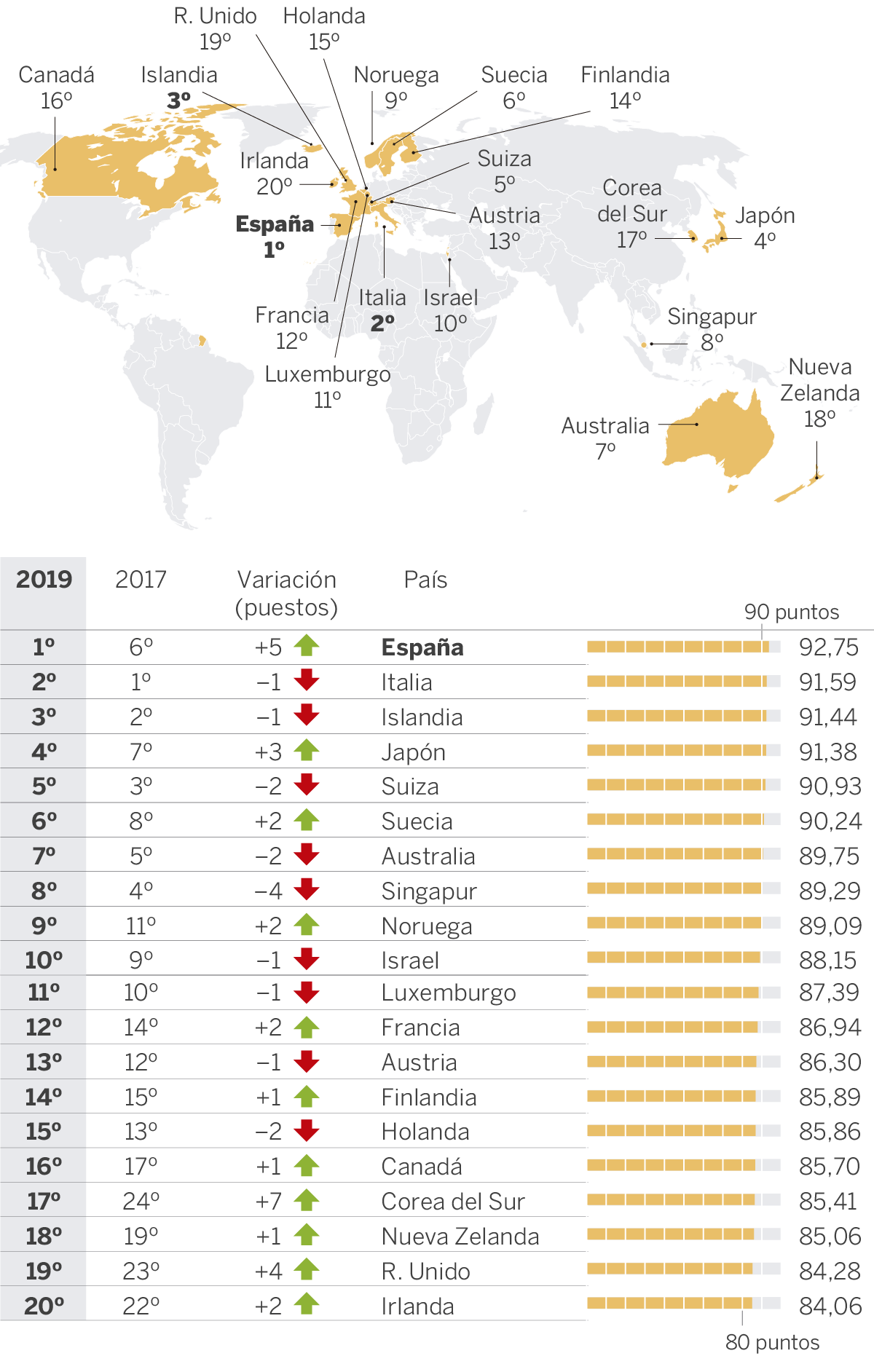 How was this classification calculated?

The index ranks nations based on variables that include life expectancy, while imposing sanctions for risks such as tobacco use and obesity. It also takes into account environmental factors, including access to safe drinking water and sanitation.

Bloomberg assessed health variables and risks ranging from those of a behavioral nature to environmental characteristics. The final index only included nations with at least 0.3 million inhabitants and sufficient data. 169 WHO states met the criteria for inclusion.

Spain has the highest life expectancy at birth among the nations of the European Union, and only lags behind Japan and Switzerland worldwide, according to data from the United Nations.

“Primary care is provided mainly by public providers, specialized family doctors and staff nurses, who provide preventive services to children, women and elderly patients, as well as acute and chronic care,” according to the European Observatory of Health Systems and Policies 2018, which reviews the situation in Spain and points to a decline in cardiovascular diseases and cancer deaths in the last decade.

As we wrote in our previous article: “10 reasons why you should buy a property in Spain” The Health System is classified by the World Health Organization as the seventh in the world.

Spanish Diet – Mediterranean Diet
“The researchers state that eating habits can give clues about the health levels enjoyed by Spain and Italy, since “the Mediterranean diet, supplemented with extra virgin olive oil or nuts, had a lower rate of important cardiovascular events than that assigned to a diet reduced in fat,” according to a study led by the Faculty of Medicine of the University of Navarra.

According to OECD research, the ability to successfully combine work, family commitments and personal life is important for the well-being of all members of a household.

In Spain, almost 6% of employees work long hours, less than 13% of the OECD average, and the more people work, the less time they have to devote to other activities, such as time with other people, leisure activities, food or sleep. The quantity and quality of leisure time is important for people’s overall well-being and can bring additional benefits for physical and mental health.

In Spain, full-time workers devote an average of 66% of their working day, i.e. 15.9 hours, to personal care (eating, sleeping, etc.) and leisure (socialising with friends and family, hobbies, games, computer and television use, etc.), more than the OECD average of 15 hours.